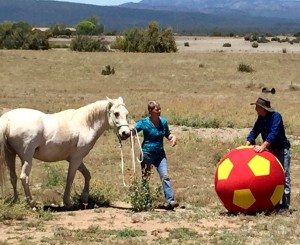 Finally, a holiday toy for your horse

Horsing around with America’s favorite pastime yields home runs for thousands of equines worldwide as owners push playing ball with Equi-Spirit Toys & Tools from Prescott to fortify their animals’ minds, bodies and spirits.

One horse lover, Tamra, writes that her Haflinger, Rusty, “really enjoys playing with his equine ball…It has been a fantastic toy, and a great training tool…from teaching Rusty to trot while in saddle to helping my Haflinger, Adler, become more brave. I even play ‘catch’ with both horses, rolling the ball to them and they roll it back using their noses… Thanks so much for the great toys.”

Rusty, Adler, and other equines romp with 25-inch or 40-inch balls in arenas, round pens or open pastures, thanks to humans such as Tamra who recognize the importance of horse play to their equines’ overall health and well-being.

“All animals love to play,” said Lisa Ross-Williams, co-owner with husband, Kenny Williams, of the company that has created, markets and sells “horse-proof” balls designed to withstand aggressive equine kicks, bites and squeezes.

“People [often] think horses are livestock and that they don’t have that play drive,” she continued, “but they absolutely do. Play strengthens mind, body and spirit. Horses are meant to move in a natural state. All too often, they are not given much room or ability to roam with a herd.”

As a result, the equines can exhibit signs of boredom and listlessness. The positive physical benefits of horseplay, she says, include healthy digestive systems and hooves, along with emotional security and brain challenges.

Playing “stimulates their minds when they are able to figure out ― especially with a ball ― how they want to play,” Ross-Williams explained, citing pushing, kicking, lying atop or nudging among the options.

The business venture arose from an effort to help Riley, a two-week old orphan colt the couple saved from auction. The motherless foal’s survival was tenuous in 2000. The couple recognized that “he needed to start moving to get strong. Once horses are up and nursing, they need to be moving 10 miles a day. We knew that physical exercise was very important for him.”

Sensing that toys might stimulate Riley to get the exercise and play he needed, the couple gave the colt every toy imaginable, only to watch as he quickly destroyed them. Needed, they decided, was a ball that could survive Riley and his tough brand of horseplay. Through trial and error, varied designs, and multiple prototypes, they finally developed a ball with enough durability to pass the Riley field test.

The ball sold today consists of a thick, durable PVC bladder overlaid with a 1000 denier U.S. Cordura cover. The covers are made in Phoenix and the bladders come from New York. All balls include the company’s patented air fill chamber enclosure, which keeps the inflated bladder safe from prying horses and donkeys. The cover “closes immediately on itself, so that the horse cannot get into the inner bladder,” Ross-Williams explained.

Cost is $125 for the smaller 25-inch ball designed for ponies, minis and other small or timid animals, and $185 for the 40-inch diameter, which may have more appeal for larger equines.

The balls generally tend to last five years or longer, when some owners have contacted the company about new covers. Cover-only sales are restricted to previous customers, Ross-Williams stated, to ensure that their branded product is correctly utilized. The bladders used by Equi-Spirit are specifically made to withstand 1,000 to 1,500 pounds per square inch of pressure and not pop, she said.

At one point, the couple engaged retailers in the country and around the world to help sell the Equi-Spirit Balls. However, the expense of quality production and limited customer service from third parties prompted them to focus the sales function in-house. The couple is protective of both their product and their reputation.

“We were told by some businesspeople that we are making them too durable,” Ross-Williams said. “They said we should make them so they fall apart and people would come back to buy more. We are a small business. We have horses [and understand the expense of caring for animals]. We would not put our integrity on the line and do that. It happens too often in the business world.”

Ross-Williams and her husband own a menagerie of animals, including seven equines, two cockatiels, three dogs, two pigmy goats and seven cats. The equines ― including a miniature, an Arabian, a donkey, and a Paint ― were all rescue animals. They all reside at Talking Horse Ranch in Williamson Valley.

“I have loved horses all my life,” Ross-Williams said. “I had a horse when I was a little girl. I got her when I was 10 years old. Her name was Liza and she was 10, too.”

Later in life, Ross-Williams met her husband when they both served in the Air Force. They did not have horses for many years until they purchased their first property together in Apache Junction. Ultimately, they began educating people about natural and holistic horse care through publishing, webcasts and the Equi-Spirit balls.

And based on the couple’s ongoing success in the horse arena, the Equi-Spirit Toys & Tools business is going to the dogs ― happily in the form of 25-inch Canine-Spirit Balls. QCBN

For more information about playballs for dogs or horses, go online to www.equi-spirit-toys.com or call 928-999-5759.