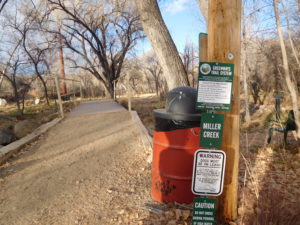 Goodman said several groups and organizations have been involved in planning corridor improvements.

Long-anticipated improvements along the Granite Creek Corridor will be delayed for at least a year because bids for the requested construction came in substantially higher than what had been originally estimated.

Only two bids were submitted, one by Asphalt Paving and Supply for $2.55 million, the other from Fann Contracting Inc., for $3.4 million. Both were significantly higher than the original $1.9 million cost estimate. Bids were received by the City of Prescott and presented to the City Council on Oct. 26.

Tyler Goodman, assistant to the city manager, told Quad Cities Business News that costs were higher because construction and materials costs and supply chain issues had increased dramatically during the past several months. City officials commented that higher estimates on many bid requests are not unusual at this time, and in some cases, costs had increased by as much as 30% to 40%, they said.

“We’ll have to go out to bid again,” Goodman said. “That most likely will take place in late spring or early summer 2022. We’ll be submitting this bid request again through the city’s budget process and will have to receive continued City Council support.”

Another complication is the $500,000 grant the city had applied for through the Land & Water Conservation Fund in 2021 will be delayed until the 2022 round for grants.

Goodman said he and City Recreation Services Director Joe Baynes will pursue that grant request opportunity again and believe they can ask for even more than a half-million dollars.ed

What Corridor Improvements Will Include

For years, city personnel and local groups have considered Granite Creek Corridor, the riverbed that runs through the center of downtown Prescott, as a potential destination in itself, like a miniature riverwalk, similar to the one in San Antonio.

When complete, it is expected to include better overhead lighting, new signage, Greenway Trails and improved trail surfaces, better access for those with physical disabilities and major improvements to creek channels.