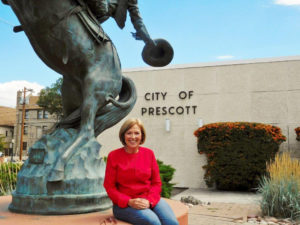 Billie Orr has made a habit of becoming involved in her community, no matter where she lives.

That’s definitely true in Prescott, where for the past five years she has served on the Prescott City Council, elected the first time in 2015 and re-elected in 2019. Since 2017, she served as mayor pro-tem for Mayor Greg Mengarelli.

Until her resignation, which was effective on Jan. 19, Orr was especially involved in a new program – the Commission on Well-Being.

“A Gallup Poll cited Prescott as a community of well-being: having purpose, sense of community, and healthy socially, physically and financially. I really thought we should focus on those points and truly become committed to those objectives,” she said. “That’s what I wanted to do.”

But now, Orr will be relocating. In December, she contracted COVID-19 and pneumonia and was hospitalized. Now recovered, she has been advised by her physician to find a locale with a lower elevation. She and her husband, Bob, have sold their home and are packing.

“Maybe later, I’ll get to play more pickleball,” she said with a grin.

It will be a tough move for the Orrs as they leave Prescott for Scottsdale.

Originally from Mississippi, Orr moved to Arizona with her parents in the 1960s. She earned three degrees in education at Arizona State University. She was a school principal in Scottsdale when she was tapped by Arizona Superintendent of Public Education Lisa Graham Keegan to become deputy superintendent for four years, from 1997 to 2001.

In 2001, she was invited to become president of the Education Leaders Council in Washington, D.C. “That was fascinating to work with education reform leaders from throughout the United States,” Orr said. “In my view, K-12 education is the most important ‘product’ we manufacture in this nation.”

She and Bob, her husband of 48 years and a former Air Force pilot, decided to move to Hawaii, where she promptly became involved as a consultant in education with the Hawaii Public Education System.

In 2003, she and Bob moved to Bozeman, Montana. Immediately, she was named director of development for the Montana Bible College from 2003 to 2011.

When they returned to Arizona, this time to Prescott, she quickly began participating in local and regional activities, including being named president of the Prescott Republican Women’s Federation, the largest organization of its type in the United States. She’s involved in several community organizations, including the Willow Hills Baptist Church, Phippen Art Museum, Big Brothers, Big Sisters, and Western Heritage Center.

Prescott Mayor Greg Mengarelli says Orr really put her mark on the greater Prescott area during her service as a city council member. “Billie’s boundless energy and eternal optimism are inspirational to both her fellow council members and city staff,” he said. “She leaves the city in a very good place, ready to take on new challenges and opportunities before us. I want to profoundly thank Billie for everything she’s done for the community. We wish the Orrs the best as they embark on their next chapter.”

Arizona Town Hall President Tara Jackson calls Orr a phenomenal leader and an asset to any community. “She is not only intelligent, organized and responsible, she is someone who leads from the heart,” Jackson said of Orr, who has been on the ATH board of directors since 2018. “She courageously strives to bring diverse people together in ways that honor and strengthen the entire community.”

Within Yavapai County, that same kind of praise is echoed by Craig Brown, chair of the Yavapai County Board of Supervisors. “Billie is the epitome of the Energizer Bunny. I thought I was everywhere, but I am second to Billie. Over the years, we have become friends and political partners, no matter at the local, county or state level. I admire what she and fellow councilmember Steve Sischka did to secure funding and support for Proposition 443, which helped decrease the unfunded liability of PSPRS for the City of Prescott and its taxpayers. She has long fought for funding for local transportation through the Central Yavapai Metropolitan Planning Organization.”

Fellow councilmember Alexa Scholl says she was mentored by Orr. “Billie was a great friend and mentor to me. I’m saddened to see her leave the council. I’ve always appreciated her passion and enthusiasm for Prescott. But I’m glad she’s doing what’s best for her health. I wish her the best.”

When asked what she would name as her superpower, Orr responded, “If I have a superpower, it’s my passion to bring people together for a common purpose for the benefit of society.” QCBN