You are here: Home / Archives for Billie Orr 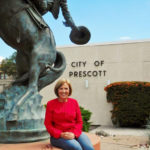 Billie Orr has made a habit of becoming involved in her community, no matter where she lives. That’s definitely true in Prescott, where for the past five years she has served on the Prescott City Council, elected the first time in 2015 and re-elected in 2019. Since 2017, she served as mayor … END_OF_DOCUMENT_TOKEN_TO_BE_REPLACED