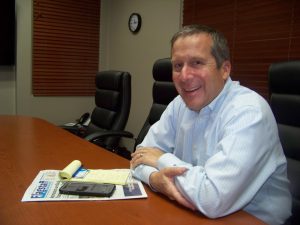 The result from those months of study demonstrates a shift from the prior theme, “Visit Prescott,” to the new theme, “Experience Prescott.”

The City of Prescott tourism and destination marketing team is encouraging visitors to stay longer and experience more.

A new strategy was outlined in detail to business and community members during a Tourism Department meeting at Tis Gallery on June 22.

City of Prescott Community Outreach Manager John Heiney explained that developing the strategic plan began more than three years ago. “We used data gathered from local and regional surveys and from one-on-one interviews as the basis for our deliberations. Decisions were based on real data, not ‘what if’ ideas.”

The result from those months of study demonstrates a shift from the prior theme, “Visit Prescott,” to the new theme, “Experience Prescott.”

The intent, says Heiney, is to increase the amount of time and money spent by visitors who will celebrate and honor the history, culture, traditions and natural beauty of Prescott and the area.

He said the new theme goes beyond just having people visit. It emphasizes schedules and itineraries that prompt visitors to stay longer in the unique Southwestern city.

Tourism numbers throughout Arizona are up significantly from a year ago. Data released by the Arizona Office of Tourism (AOT) show that statewide in 2021, 40.9 million overnight visits were recorded, up from 32.1 million in 2020. Even so, that number is still far behind the record year of 2019, when 46.6 million visitors overnighted in Arizona.

Heiney noted that tourism numbers already are up in Yavapai County and in Prescott this year. He told Quad Cities Business News that a major factor in bringing more visitors to Prescott was the service provided by the expanded operation of Prescott Regional Airport, where deplanement and enplanements have increased from last year.

Heiney emphasized the city’s tourism department is funded through bed tax revenue. Those dollars are generated from a tax on hotel rooms and short-term rental units. Bed taxes for the current year are up substantially from last year. City officials estimate that taxes could amount to as much as $1.4 million to $1.5 million during the current fiscal year.

“All this has intense impact on the economic vitality of the community. We’ve got to note, too, that we need a larger workforce to fill vacant jobs,” said Heiney.

The Destination Marketing Organization (DMO) is required to use 75% of the bed tax monies to attract more visitors and to improve and upgrade recreation and tourism-related efforts, he said. Already, funds have been directed to events and activities such as the World’s Oldest Rodeo, the annual Courthouse Lighting, and support for several museums. Bed taxes also support 29 local non-profit events. Another $350,000 goes for city services such as recreation projects, open-space management, maintenance of the downtown parking garage and improvement of local lakes such as Watson, Willow and Goldwater lakes.

The city is collaborating with the Yavapai County Economic Resource Alliance (YCERA) and the Yavapai College Regional Economic Development Center in the creation of materials. Heiney said the department is considering hiring a sales and marketing consultant whose responsibility would include generating more tourism-based travel to Prescott.

The refreshed website is expected to launch by January. QCBN