You are here: Home / Local News / Planting Seeds for the Prescott Food Forest 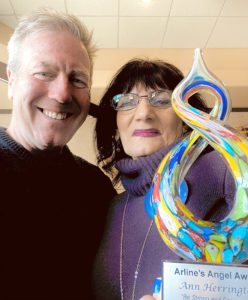 In Prescott, it’s an idea ripe for the picking: a gardening discovery center exploring the world of growing food and eating healthy for all generations, to be called the Prescott Food Forest.

With a slogan of “Where People Come to Grow Together,” the plan has been growing.

One of the central elements of the project is creating a community garden, a concept not new in Prescott, as a previous community garden near Granite Creek had closed a few years ago.

However, with the pandemic in 2020, interest in community gardens flourished as people woke up to worries about food security. The community garden concept is loosely modeled on the old victory gardens essential during both World Wars, backyard gardens where citizen gardeners maintained plots to grow vegetables, fruit and herbs to augment dwindling national food supplies.

Prescott realtor and entrepreneur John Murphy is spearheading the Prescott Food Forest project and will lead the presentation of a comprehensive plan to the Prescott City Council within the next few weeks.

Plans call for the center to be located on a two-acre parcel of land owned by the City of Prescott near the Heritage Park Zoo. In the 1999 Prescott Master Plan, this parcel was chosen as the future home of a community garden.

Healthy food has long been a passion for Murphy, who started a non-profit foundation several years ago, the Make 100 Healthy Foundation, with the goal of encouraging healthy lifestyles for longevity.

“A key factor in living a long and healthy life is the food we put into our bodies,” Murphy said. “Growing food has become somewhat of a lost art form. When I started this foundation a few years ago, the mission was to grow 1 million new victory gardens in the next five years. Why this mission? It’s because we have a rampant epidemic of obesity and diabetes. People think they are eating healthy food, but they are actually eating empty food with little nutritional value. This is an opportunity to fill a void created when the previous community garden went away.”

Murphy and the three-person board of directors for the Prescott Food Forest will be asking the City of Prescott to approve their plan to create the food forest design, which will include the gardening discovery center with a community garden.

“The property is already fully fenced, has water and electricity and is a blank canvas to build on,” Murphy said. “We are asking the city to grant us a 10-year lease, and we will beautify the property for the good of the community.”

After an analysis of why the earlier community garden in Prescott failed, planners will hire a garden manager who will be on site to tend the gardens and maintain the property, help oversee alternative growing models for optimal food production and engage with all who use the garden.

Murphy said that LeRoy Miller, a Yavapai County Master Gardeners member, has volunteered to serve as acting garden manager until a permanent one can be found. The long-term goal is to build a strong organization with members and volunteers who share a common mission: to bring people together with purpose and pleasure, discovering the joys and benefits of growing food.

Prescott resident and Quad Cities Business News Advertising Manager Ann Herrington is also a board member. She heard about the proposed project last year when Murphy made a presentation to the Prescott Frontier Rotary Club.

“He’s really an incredible guy,” she said. “He’s worked hard on this and gotten a lot of people in the fold. He’s making connections and is talking with Prescott Meals on Wheels about the prospect of them buying food from us. He’s also connecting with local schools where they can come as a field trip to see how the food is grown. The goal is to help people learn how to be healthier.”

Herrington calls the location a perfect fit. “It’s just been sitting there for years. We have to get in there and clear it and make it all happen.”

The layout for the project includes creating small structures such as kiosks, raised garden beds, a greenhouse that can produce food year-round (via aeroponic vertical gardening), an industrial kitchen and a fruit and vegetable stand. A focus on sustainability, which Murphy said was lacking in the previous community garden, will be highlighted.

“We have a whole group of people who have gotten behind this concept for Prescott to have a garden we can call our own,” he said. “There’s been a lot of thought and effort put into building it and sustaining it. It’s not just a feel-good, spur-of-the-moment effort, but rather, it aims to be part of the fabric of Prescott’s outdoor community. We want to create a fellowship through the efforts of gardening.”

Also vital to the mission of the Prescott Food Forest is its design as a gardening discovery center. Organizers envision a gardening educational platform that will be a world-class   attraction accessible to all residents of Prescott, as well as visitors and tourists.

Board member Stephanie Leon, who also drafted the menu of gardening classes, will be the Prescott Food Forest education director, Murphy said. Classes and seminars will be offered on gardening, preserving food, healthy cooking and eating, pickling, promoting immunity, overcoming the challenges of high-desert gardening, and teaching alternative growing methods such as indoor, patio, hydroponic and vertical farming.

“We plan to offer multi-generational gardening classes, including a ‘Grandpa and Me’ program,” said Murphy. “Older and younger folks who don’t think they have anything in common will find they have much more in common than they thought.”

Herrington will be one of the teachers at the new facility. Toward that goal, she will soon be completing a three-phase course at Cornell University to become certified as a whole food, plant-based nutritionist. She received a $500 “Arline’s Angel Award” toward her tuition through his foundation, which was set up by Murphy to honor his parents.

Upon approval from the City of Prescott, a community awareness and fundraising campaign will commence, with a “Let’s Get Growing Prescott” theme. The goal is to raise $100,000 to build, maintain and market this effort.

Murphy said he hopes they will have the Prescott Food Forest plans approved by the end of this month. “We will present a full vision, which includes a working budget, an implementation plan and design layout.”

There will also be charitable giving by providing food and education to the underprivileged, with a plan to give away at least 10% of what is grown to the food bank and other outlets that help those in need.

“The Greater Prescott Outdoor Fund has allocated a $7,000 grant that will help us get started,” said Herrington, who is overseeing fundraising efforts.

Murphy, who was chairman of the Commission on Well-Being for the City of Prescott, said he has always wanted to give back to the community. “I believe this will be a legacy project, a destination location for gardening, learning, fellowship and community gatherings.” QCBN