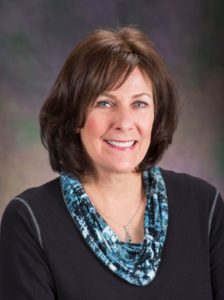 Starr Herridge left her home one morning to go to the mall, a familiar trip where she regularly picked up her cigarettes. But, on this particular morning in 2012, Starr decided to pull in to the neighborhood drug store instead, and found herself purchasing smoking cessation patches.

Starr said with a laugh, “I guess I was lazy – I didn’t want to go all the way to the mall.”

“Once I retired, I started smoking so much more,” Starr admitted. “When I was working, it wasn’t so bad because I wasn’t allowed to smoke at work. But I didn’t know what to do with myself at home and I ended up smoking all day long. I knew I had to do something.”

Thankfully, the patches worked, and Starr has been a non-smoker ever since.

Fast forward to 2018, when Starr’s primary care physician recommended a Medicare well-clinic health screening. Given Starr’s history of smoking, it was recommended that she get a low-dose CT lung scan. Starr figured it couldn’t hurt. She went to Yavapai Regional Medical Center (YRMC) where she qualified for free annual lung screenings through the Lung Cancer Screening and Care Program.

“YRMC’s Lung Cancer Screening and Care Program follows people generally between the ages of 55 and 77 who are at a higher risk for lung cancer due to a history of smoking,” explained Jennifer Harvey, RN, BSN, Patient Navigator at the YRMC Lung Cancer Screening and Care Program. “The screening uses a CT scan with a lower dose of radiation to take very detailed pictures of the lungs to detect cancer in its early stages, which allows for a greater chance for a cure.”

“I first met Starr in July 2018, when she came to the program,” said Harvey. “The first thing you notice is her sense of humor and her kind, humble heart!”

The Lung Cancer Screening and Care Program is covered by private insurance and Medicare for people who meet certain criteria, including:

– Current smoker or quit within 15 years

Harvey notes that you need an order from your provider, so a good starting point is to talk to them first. In addition, a cash pay, discounted rate is available for those who do not qualify for insurance coverage.

“My job is to provide information, answer questions and interpret what each individual patient needs,” said Harvey. “The whole idea from the very start is that everyone is in a different place. I followed Starr’s case and checked in occasionally to see how she was doing.”

A year later, one of Starr’s regular screenings showed a very tiny nodule on one of her lungs. Although Starr showed no symptoms at all, her physician wanted to do a biopsy to be sure. However, the nodule was so small that it was impossible to biopsy.

Starr and her doctor discussed Starr’s options. “I said, ‘Let’s just go in there and get it out!’” Starr recalled with her signature enthusiasm. “Within three weeks, I was in the hospital.”

“I saw Starr after the surgery. She did great,” said Harvey. “The biopsy tested positive for cancer, but the good news was that the margins were clear, which means that everything around it was negative. This is exactly what you hope for, and it was made possible because we caught it so early.”

Starr now goes in for follow-up CT scans every four months. She considers herself an advocate for screening and early detection. “I always tell people, ‘Why wait until you have a symptom? It takes 30 minutes out of your life, it doesn’t hurt, you don’t get undressed, and you just get up and go. Plus, it’s free, and I like free!’”

After a pause, Starr’s tone becomes more serious. “We got rid of the cancer before I became sick. I didn’t have to endure chemo or radiation because I went in early and they got all of it. It saved my life.”

“Of course, quitting smoking is the most important thing you can do to reduce the risk of lung cancer,” said Harvey. “But that risk is still about three-fold in comparison to people who have never smoked, even 25 years after quitting. The value of regular screenings can’t be overstated.”

So, why don’t more people participate?

“One of the biggest reasons people are reluctant is that they just don’t want to know,” explained Harvey. “We find this largely in people who are currently smoking. It’s hard to hold up a mirror to what smoking has done to their bodies. Another comment we hear is, ‘Well, I feel fine. I don’t need to do this.’ The truth is, the vast majority of lung cancer symptoms don’t appear until later stages.”

“The great news is that the survival rate of lung cancer is on its way up. There are now more treatment options besides surgery, radiation and chemotherapy. What was considered a poor prognosis 10 years ago may hold a lot more hope now, thanks to immunotherapies and targeted therapies,” said Harvey.

The other important factor is that smokers and former smokers like Starr are becoming more aware of the life-saving benefits of early-detection programs like the Lung Cancer Screening and Care Program at YRMC.

“My health is so important to me because I love life. I have two sisters, and I love being with them. I have a great group of friends – some are even from high school,” Starr continued. “Plus, I have a dog sitting business that I love. Dogs just love you unconditionally. I provide a great service to my clients, and just have a ball with the dogs.” QCBN

For more information about the Lung Cancer Screening and Care Program at YRMC, call Jennifer Harvey, Patient Navigator, at 928-771-5454 or visit YRMC.org.

Joanne Mack Robertson is freelance writer and video producer. She and her husband, Jeff, are the creative energy behind Big Picture Video Production in Prescott and Tucson.